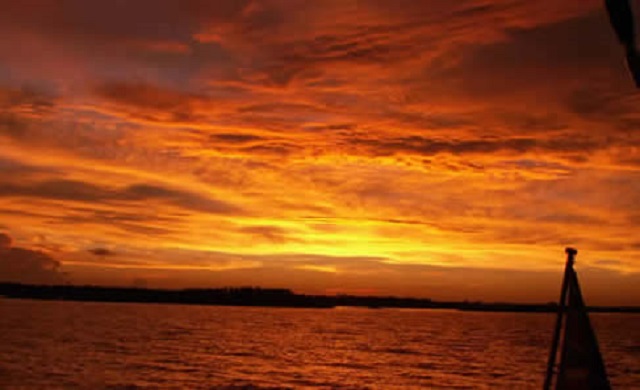 I boarded “Camille” in Cape Canaveral with the plan to help deliver her to the Chesapeake Bay and show the English owner the east coast of the US on the way. “Camille” 50′, 23 tons, draws 7’3″ and has a mast of over 63′, which really helped her cross the Atlantic in the 2004 ARC when the owner, Peter, sailed her over to cruise the Caribbean. However, as anyone who has run the ICW knows this presents some challenges on the ICW. We went outside from St. Augustine to Savannah and then again from Savannah to Charleston. I wanted them to see as much of our beautiful coast as possible and the Atlantic was stirred up by a tropical storm so we took the ICW the rest of the way. We made it, without any mishaps.

I hated to miss the GA coast but there is no way that keel would make it through Hells Gate and some other areas. We were very fortunate to see 5 mature bald eagles in SC, numerous osprey and many other birds. In the Cape Canaveral area we were constantly entertained by dolphin and manatee. No matter how many of these beautiful creatures I see I am still amazed by them. The national seashore around Cape Canaveral is one of the best areas I have found for seeing wildlife. We stopped in many of the neat small towns along the way such as both Beaufort SC and NC, Wilmington, Morehead, Solomons and more. I think our English friends had a good time, I know I did.